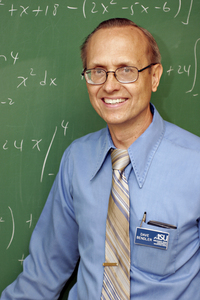 FULL-TIME MATH INSTRUCTOR in the School of Arts and Sciences

David Bendler has 6.5 years of experience in the industry designing VHF, UHF, and microwave antennas as an electrical design engineer.

He went back to school in 1976 and received a master’s degree and certification to teach math at the secondary level.  He has one year of experience in the Chicago, Illinois, area, and 15 years of experience at Gainesville High School in Gainesville, Missouri, teaching math and later also chemistry and physics.  Before leaving Gainesville, he began teaching as an adjunct math instructor at North Arkansas Community College in Mountain Home.  Mike Huber (then co-director) encouraged David to get another master’s degree with at least 18 hours in math because the time was coming for hiring full-time instructors.  David was the second full-time math instructor hired for the Mountain Home Technical College in 1992 (which later became ASUMH).  Currently, he has 28 years of experience at ASUMH and thoroughly enjoys working with his colleagues, administration, staff, and especially with the students.

His wife says his retirement plan is to be carried out in a pine box – with a stick of chalk in his hand!